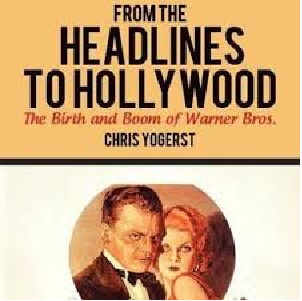 The class is located at Cedar Ridge Apartments.

Part One: Warner Bros. origins and 1927-1929. This will cover the birth of the studio, their investments in sound technology, and role in creating what was known as the "Studio System" in Hollywood. I will discuss how Warner Bros. set themselves up to be the most important studio of the 1930s with smart investments and savvy film adaptations of current events.

Part Two: Warner Bros. 1930-1933. During these years the studio pioneered and perfect the classic gangster genre. Writers were literally "ripping from the headlines" to create stories that connected with a public fascinated with mobsters and terrified by the Great Depression. Warner Bros. began to run into trouble with the edgy films when industry censorship became more strict.

Part Three: Warner Bros. 1934-1936. These years were transitional for the studio as they learned to make content that fell within the strictures of the newly enforced Production Code ushered in by the Legion of Decency. Warner Bros. began making swashbuckling adventure films and epic literary adaptations as well as films about anti-Semitism.

Part Four: Warner Bros. 1936-1941. During this time Warner Bros. began fighting World War II years before the United States entered the war. Once again "ripping from the headlines," the studio adapted famous stories from past and present that dealt with prejudice home and abroad. As the war in Europe worsened, the studio's films became more direct culminating with the first film in Hollywood to address Nazism directly.

If you cancel your registration more than 72 hours prior to the class start date, a voucher will be issued to you. If less than 72 hours’ notice is given, you will not be eligible to receive a voucher. No refunds are given for registration cancellation requests. Vouchers are not issued for, and cannot be redeemed towards trips, online classes, or credit courses.